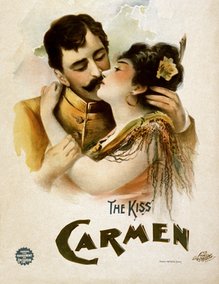 “Habanera” is a fun way to learn and use the Chromatic Scale(at least the going down part).  The Melody has been used in several TV commercials, cartoons, and countless films;  you’ll recognize it right away.

Don’t forget the old rule: “The accidental carries through the measure.”  For example:    In measure 7 of the melody part  the first note has a flat on it.  Using the old accidental rule that means that notes 3, 5 and 7 (because they are on the same line or space as note #1) are also flat notes. Also, in measure 11 note #2 is flat. That means that note #6 is also a flat.

cantabile (measure 4):  In a singing style.

legato (measure 21):  play the notes with almost no space in between but not slurred.  Say “do” instead of “to” when tonguing the notes.